Jessica Gourdon, Translated by Nina Fink
Publié le 17.04.2015 à 14H27
Without a doubt, the video game industry wave has hit Manhattan. NYU's research facility, the Game Innovation Lab, is here to study it. In preparation for EducPros' East Coast Learning Expedition in the U.S.A. at the end of April, we decided to find out just what this multidisciplinary, relaxed research lab is playing at.

Video game research is still in its early years but NYU has already carved out its niche. According to Katherine Isbister, Research Director of the Game Innovation Lab at the NYU Polytechnic School of Engineering, "Four American universities stand out in the field: NYU, UC Santa Cruz, Georgia Tech and Northwestern."

The Game Innovation Lab was founded in 2011, thanks to a $2 million grant from New York State. While the lab counts the NSF among its funders, video game companies have been slow to get on board. Isbister laments, "They're not interested in funding research yet." Associate Professor Julian Togelius explains, "For now, we research topics that interest them in exchange for access to their data."

Inside the lab, the open space layout and sweatshirt-friendly dress code make for a youthful, relaxed atmosphere. The walls are covered in screens and the lab is equipped with consoles, board games, a virtual reality headset and a giant touchscreen. The 17 staff members have backgrounds in fields ranging from art to electronics and IT. The lab also benefits from its partnership with the NYU Game Center at the Tisch School of the Arts, which specializes in game design.

The lab's projects run the gamut from Kaho Abe's technology-embedded costumes to Eddie Melcer's game designed to help children with type 1 diabetes change their diet. Aaron Isaksen, who looks at the behavior of Flappy Bird players, wants "to understand and measure the feelings that machines produce in us."

Isbister observes, "We're lucky to work in a multicultural city influenced by fashion, culture and the arts." While California remains the Mecca of video games, New York has been cultivating its clout for five years now. Both Atari and small, independent studios such as Kaos Studios, Take-Two Interactive, Large Animal Games and Zynga have made their home here. The Game Innovation Lab often hosts industry events. Meanwhile, New York is doing everything within its power to ensure that this industry is here to stay. 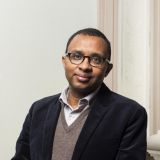