Accueil  /  Actualité  /  The Slow but Steady Rise of EdTech

The Slow but Steady Rise of EdTech

According to EdTech Europe Global foundation Founder and former Time Warner Vice President of Strategy Benjamin Vedrenne-Cloquet, the digital revolution that is underway in education resembles the revolution that transformed media ten years ago. Both involve content production, distribution and impact.

As in the content industry, digital tools have positioned education as a service, rather than content. So should knowledge and courses be free? For Vedrenne-Cloquet, certification is the key. "Learning will remain free but certification will cost money."

Without a doubt, most of the growth in education in the coming years will come from emerging countries. 90% of people under the age of 30 live in the Middle East, Asia and Africa. Private higher education institutions and international companies are investing in these markets to train executives and middle managers on the ground.

The French and Anglo-Saxon educational models will lose their prestige. It would be wise to draw inspiration from other models instead.

#4 From School to Skills

Increasingly, people will need to update their skills as they become irrelevant faster and faster. 36% of employers can't find candidates with the skills they need and 36% of people in the workforce describe themselves as under-employed. Schools need to do a better job anticipating the skills of the future. Degrees must be replaced by skillsets.

We live in a globalized world. In the future, giant American institutions will dispense university-level content. There will be a race among institutions worldwide to lead the field. For now, there are few serious French contenders. 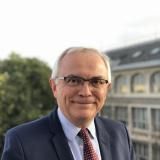